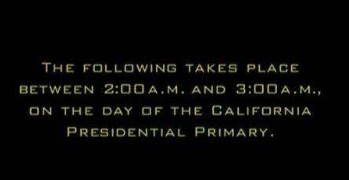 Jack Bauer: {Voice over} The following takes place between 2:00 A.M and 3:00 A.M. on the day of the California presidential primary. Events occur in real time.

{Jack continues to drive through red lights as he pulls over to the side and takes the thumb that he cut off and sends it to the data services center through his scanner.}

Operator: Authorazation.
Jack Bauer: Bauer 4393 c.t.u.
{He sends the fingerprint}
Operator: Okay were on it.
Jack Bauer: Get back to me as soon as you have a match.
FADE OUT:

Ira Gaines: You got to be kidding me. We had a deal Mandy. You promised to deliver Belkin's I.D. in exchange for one million dollars and now she wants to double it.
Mandy: Ira I'm sorry. She doesn't know how this works.
Ira Gaines: NO, THIS IS YOUR FAULT. You should of never invovled an amature in our work.
Angela: If I'm such a amature then
{Mandy slaps Angela in the face}
Angela: I'm just trying to get us more money.
Ira Gaines: There is no more money.
Mandy: Ira I'll fix this.
{Gaines's cell rings}
Ira Gaines: WHAT!...................................no we don't have it yet. I'll get back to you when where ready. {Hang up} Talk to her. Explain what I do.
Mandy: I will but our deal stands.
Ira Gaines: FORGET IT. {SLAMS DOOR INTO OTHER ROOM}

Ira Gaines: Damit.
Johnathan: I need to get out of here my friend.
Ira Gaines: It'll just be a little longer.
FADE OUT:

Dan: Yeah.
Ira Gaines: It's gaines I need an update on the Bauer girl.
Dan: Everything's kopa. Were just waiting on you.
Ira Gaines: I'm running a little late.
Dan: Were not going anywhere.
Ira Gaines: That's right your not. {Hangs up}


Rick: Janet's in pain man I think you broke her arm.
Dan: Really you think so. I'm smoking another j you want one?
Rick: Sure.
Kim Bauer: So is Dan the boss and you do everything he says.
{Rick grabs dan's stash of drugs}
Dan: Yeah man what
{Rick pushes Dan down}
Rick: Don't press me man.
{Rick injects a drug into Janet's arm}
Kim Bauer: Your giving her that?
Rick: You want me to stop the pain or what.
FADE OUT:


{Jack enters from a side door. He doesn't want Nina to see him so he calls her desk line from a distance.}

Jack Bauer: Hey it's me.
Nina Myers: Jack, where are you?
Jack Bauer: I'm about a block away. I need you to print up a hard copy of Tony's passenger list and put it on my desk.
Nina Myers: Okay.
Jack Bauer: Wait there, I want to talk to you but not in front of the others.
Nina Myers: All right.
{Hangs up}
{Nina grabs the list from Tony as she starts to walk up to Jack's office Jack walks to Jamey's work station.}

{Jack walks up his stairs to his office where Nina awaits}

Angela: This will work out for the both of us.
Mandy: I don't care Angela. Now where is the I.D.?
Angela: This is not some secret I'm keeping from you. This will be better for both of us.
Mandy: You want to get both of us killed?
Angela: They hired you to blow up a plane. Another million dollars doesn't mean anything to these people.
Mandy: Your wrong money is the only thing these people care about.
Angela: Lets do it anyway. You know he can't hurt us.............One million for you one million for me. Don't you like the way that sounds?
{Mandy and Angela have a little make out session}
Mandy: Okay were gana do this your way.
Angela: Great, okay lets tell him.
Mandy: No, it would be better if I do it myself.
Angela: Your always looking out for me.
FADE OUT:


{Dan and Rick are talking outside next to the van. Kim and Janet are inside.}

{Dan and Rick continue to chase the girls} {Kim and Janet hide behind a dumpster in an alley. behind them is a street bum giving services to another man for some cash. The man says}
Man: Ahhhh forget it.
{The man walks away}
Bum: Come on man, come back. {Turns around to the girls} You just cost me fifty bucks.
{Dan and Rick see the bum but not the girls}
Bum: What up?
Dan: You see two girls run past here?
Bum: Yeah I seen em.
Dan: Which way did they go?
Bum: Who are they?
Dan: You seen them or not?
Bum: They went down central.
{Dan's cell rings}

Dan: Yeah.
Ira Gaines: It's Gaines how's it going?
Dan: Everything's fine.
Ira Gaines: Change of plans were going to meet at a new location.
Dan: Let me know I'll meet you there.
{They walk down the street}

Kim Bauer: We need to get to a phone.
Bum: No you need to pay up. {Takes some money from Kim and Janet's neckless} This real? Thank you very much.
{The bum creeps into a small space just off the street. A few seconds later the girls follow him in.}

Carl: What couldn't wait till morning?
Senator Palmer: Maureen Kingsley called ma two hours ago, said she had some new information.
Carl: David, you got me out of bed at two thirty in the morning what did she say?
Senator Palmer: Said the Gibson boy, the one who raped Nicole didn't commit suicide. That he was thrown out of a window.
Carl: Okay so he was thrown out of a window.
Senator Palmer: SAID IT WAS KEITH! She's going to publicaly accuse my son of murder.
Carl: Okay theres a couple of ways we can handel this.
Senator Palmer: It's a lie Carl. It's dirty polotics and I won't stand for it......My family had to live through that nightmare years ago and I won't put Nicole through it again.
Carl: She waits till the day of the primary so you don't have time to respond.
Senator Palmer: I don't care what day it is. It's a lie.
Carl: I know but we can't pretend like today isn't important, now I'll put a lid on Kingsley least till the polls close, we win the primary. Then take it from there.
Senator Palmer: No. We have to find out where this is coming from.
Carl: Oh I'll figure out where this is coming from and cut it off David you have your pricapals you don't compramise thats why I love you but you knew the gloves were coming off..........Go back forget about this...I'm on it.
Senator Palmer: We can't let them throw my son to the wolves.
Carl: David I'll take care of it.
{Secret service arrives}
Carl: That for you?
Senator Palmer: Yeah you better get lost.
Carl: I'll call you in an hour. {He exits}
Senator Palmer: It's allright fellas I'm fine.
FADE OUT:

INT. C.T.U. CONFRENCE ROOM
{Nina making coffee alone, Jack enters the room with a deadly serious look on his face. He walks up to Nina and whispers.}

Ira Gaines: There it is one million in your account in addition to what we agreed on now where is the I.D.?
Angela: Lets get it..............No just the three of us.
Ira Gaines: Why should I trust you?
Angela: Because you want the I.D.
FADE OUT:

Kim Bauer: Excusse me.
Man: You looking for something?
Kim Bauer: Can you help us these guys are after us.
Man: What guys?
Kim Bauer: I'll pay you whatever you want just get us out of here.
Man: Lets see the money.
Kim Bauer: Well I don't have it but I'll get it to you when you get us home.
Man: Sorry ladies I run a cash up front line of work. What's your name sweetheart?
Janet York: Janet.
Kim Bauer: Can we use your phone?
{The man attacks Kim as the street bum come out of nowhere and smacks the man with a board}
Bum: RUN..................Take the phone and run.............go go.
{The man grabs the board and beats the crap out of the bum as Dan and Rick show up and get past the man chasing the girls.}

{Gaines, Mandy, and Angela drive out in the desert to the location of the I.D. card.} {Angela digs it up and hands it to Gaines.}
Ira Gaines: Thank you.
{Johnathan the shooter fires a bullet killing Angela. He reloads and aims at Mandy's head}

Ira Gaines: That job this summer you in?
[Mandy sheds some teers as she walks past Ira and says}

{Kim and Janet are running away and out of nowhere a car smashes into Janet as she drops to the ground. Kim cries as Rick grabs her and takes her toward the van} 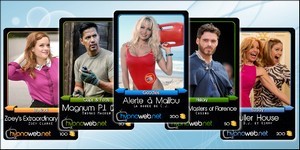